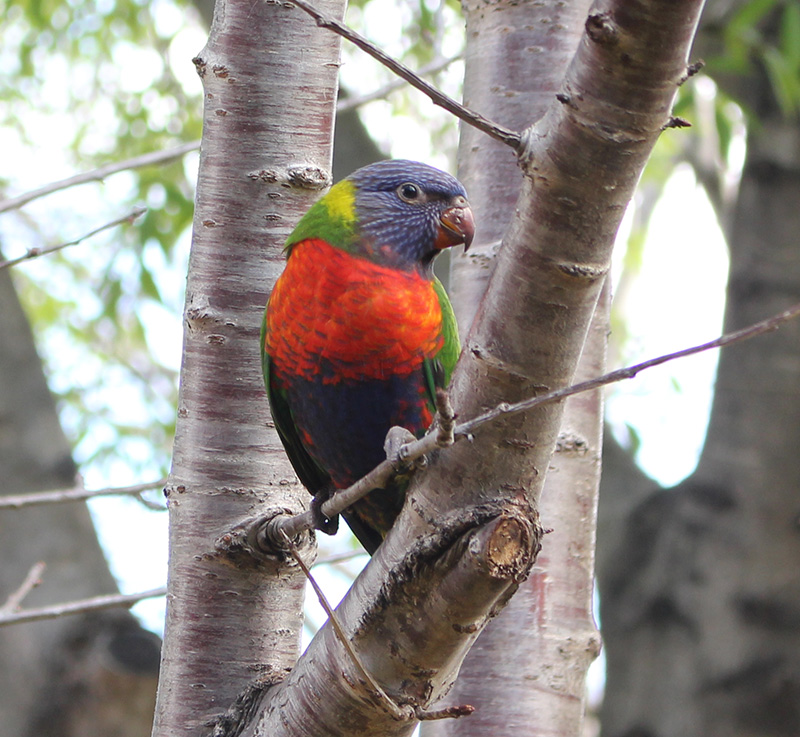 We were rather surprised to find a baby lorikeet in our front garden scrambling around amongst the plants, trying to fly back up to the overhanging trees and eventually hiding in the low hedge. It was obvious he was very young and couldn’t fly back up to his mum and dad perched nearby. Where did he come from?

The only trees overhead are deciduous and just starting to sprout leaves. Barely concealed high in the branches was a twiggy sort of nest and another baby bird. The wind was rather gusty and we have a Currawong in the area known to prey on other birds for its chicks so maybe there was a reason for the tumble to the ground. This nest was nothing like the hollow in a eucalyptus tree one would expect to be home for breeding lorikeets. In fact, it was much like the scrappy nest made by spotted doves.

Amid much squawking we did get the baby to climb onto a stick so we could lift him into the low branches of the tree. We hoped he would be safe there and the parents would come down to feed him. Unfortunately he didn’t stay put for long and the first gust of wind sent him to the ground again.

We decided it would be best to hand rear him so we put him in the same cage as our rescue Spotted Dove who happens to be blind in one eye. We have lorikeet food on hand as we feed the backyard birds. Instructions for preparing the nectar mix are on the packet. 1 heaped teaspoon of mix, 1 teaspoon of puree apple and enough water to make a mixture the consistency of runny custard. We fed him successfully from a teaspoon. The spoon was initially greeted with much squawking and suspicion but hunger won the day and little bird soon settled and bonded with us.

The parents were well aware of the baby bird in his new home. Eventually, a day or so later, they landed on top of the cage and fed him through the bars. Such dedicated parents!

Little bird was very curious and explored his cage cuddling up to the dove at night for warmth. That relationship did not last long as baby soon became a bully resulting in poor dove being evacuated to a small cobbled together cage.

The lorikeet’s tongue is fascinating. Baby uses it to explore our hands. It is rather long and the end looks like a little brush. The papillae on the tip of the tongue work their way over your finger exploring the skin and nail. Now he is older and on “solid” food he uses it to gather nectar and pollen from the bottle brush flowers we provide. 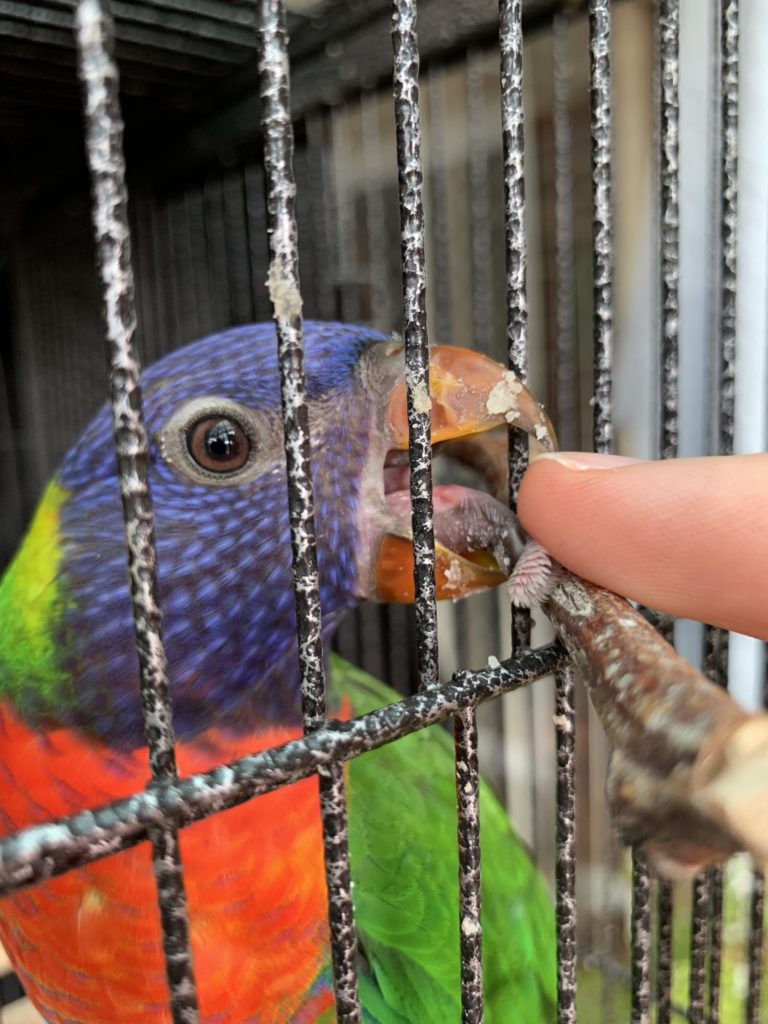 Our baby now eats normal food. Powdered nectar, fresh fruit and native flowers. He loves to bathe in his water dish getting absolutely saturated in the process. He is active and confident climbing around the cage and loves the toys we introduce. We are currently working on his flying skills and hope to release him soon.

I live in Sydney, Australia. This is my new blog, where I post photos of wildlife in my backyard, my pets and travels. My previous blog contains more of the same with a focus on frogs.